• The U.S. Department of Energy has announced $33 million in research funding to advance technologies that work toward achieving the department’s 2030 cost target of 5 cents per kilowatt-hour for CSP-generated electricity with at least 12 hours of thermal energy storage. “This research,” DOE writes, “includes new materials and technologies that significantly reduce the cost of manufacturing, enable new energy storage technologies, and develop solutions that enable a solar field to operate autonomously without any human input.”

• Walero racewear, which uses Outlast phase change technology to regulate temperature in race and rally drivers, has been put to the test on reigning British GT4 champion Jack Mitchell in a temperature-controlled race simulator. The tests were directed by racing performance coach Dean Fouache. On the first day, Mitchell, right, wore standard Nomex underwear; on the second day, he wore Walero underwear. Three measurements were recorded every five minutes during the hourlong tests: body temperature, heart rate and weight loss. In all three areas, Walero showed measurable advantages over the Nomex. “Jack sweated around 40 percent less in the Walero underwear and his average heart rate was eight beats less over the course of the hour,” Fouache told Autosport magazine. “So, all in all, relatively conclusive results – even though it is a small comparison test.”

• New this month from Central West Publishing in Australia: “Phase Change Materials,” edited by Vikas Mittal, an associate professor of chemical engineering at the Petroleum Institute in Abu Dhabi. 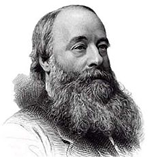 • The 200th anniversary of the birth of physicist James Prescott Joule will be commemorated with the unveiling of a plaque in Sale, United Kingdom, in April. The English physicist and mathematician, who gave his name to the unit of energy, was born on Dec. 24, 1818, in Salford. He died in Sale in 1889.

• The deadline for submitting manuscripts for “Phase Change Materials of Buildings,” a special issue of the journal Buildings, is Sunday, March 31. Dr. Morshed Alam of Australia’s Swinburne University of Technology is the guest editor.

• Correction: Last week’s item on a thermal energy storage system at Swinburne University of Technology in Australia incorrectly described one characteristic of the salt hydrate used in the system. The PCM has a melting temperature of 13-15 °C.

“Nanostructured phase change materials (PCMs) which are heterogeneous materials having at least two phases, at least one of the phases having at least one of its dimensions in the nanoscale, and comprising a first agent that undergoes an endothermic phase transition at a desired temperature and a second agent that assists in maintaining a nanostructure, are provided. There are also provided methods for manufacturing such PCMs, and applications thereof for providing thermoregulatory coatings and articles containing such coatings for use in a wide range of applications, such as cooling textiles, wipes, packaging, films, walls and building materials.” 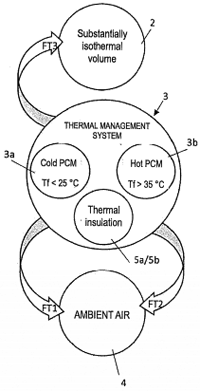 “An ostomy pouching system is described. A baseplate includes a seal [16] adapted to be securely placed on the skin [20] about the perimeter of tissue defining a stoma incised into a patient. An ostomy reservoir forms a sealed space within which discharge can be received and held. A flex layer includes a seal that is airtight, watertight, or both, and which is structurally interposed between at least a portion of two or more of the skin, tissue, stoma, baseplate, and ostomy reservoir. The flex layer includes a resiliently and elastically malleable phase change material [120]. The flex layer is deformable such that at least one portion of the flex layer can transmute the magnitude of a force applied to the flex layer and redirect the force. External forces acting upon at least one of the skin, tissue, stoma, baseplate, and ostomy reservoir are mitigated, transmuted, and isolated by the flex layer.”

From Sustainable Energy and Fuels:

From Journal of Molecular Liquids:

From International Journal of Thermal Physics:

From Case Studies in Thermal Engineering:

From Frontiers in Physiology:

From Heat and Mass Transfer:

More than 1,400 people have joined a LinkedIn group devoted to the discussion of phase change material and thermal energy storage. The Phase Change Matters group is an interactive complement to the award-winning blog and newsletter of the same name.