RAL Quality Association PCM, a European-based organization established in 2004 to develop standards for the PCM industry, has redesigned its website, www.pcm-ral.com.

“The new website has a modern and well-structured design – appropriate for a modern and advanced technology,” said Stefan Thomann, the association’s managing director. “It provides information about application areas, planning/simulation software and the certification process for being awarded the RAL Quality Mark. People interested in using PCM will find the contact data of the leading manufacturers of high-quality products.”

“Paraffin compositions including mainly even carbon number paraffins, and a method for manufacturing the same, is disclosed herein. In one embodiment, the method involves contacting naturally occurring fatty acid/glycerides with hydrogen in a slurry bubble column reactor containing bimetallic catalysts with equivalent particle diameters from about 10 to about 400 micron. The even carbon number compositions are particularly useful as phase change material.” 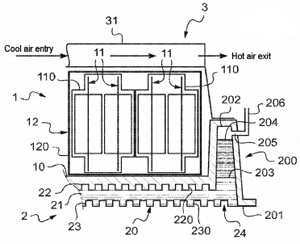 “A product is disclosed for recovering heat and may include a housing with two flow paths defined through the housing. A number of tube assemblies may be disposed in the housing. The tube assemblies may comprise an inner tube and an outer tube with a space defined between the inner tube and the outer tube. One flow path may be defined through the inner tubes, and the other flow path may be defined outside the outer tubes. A phase change material may be disposed in the spaces of the tube assemblies. The phase change material may change phases when exposed to a temperature change.” 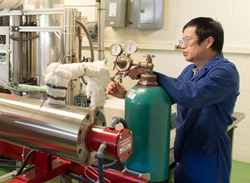 • Researchers at the Argonne National Laboratory have built and tested a blender-size prototype of an inexpensive thermal energy storage system that will be significantly smaller and more efficient than current systems. The Argonne system combines salt-based phase change material with high-conductivity graphite foam. The porous foam traps the PCM in pores, enabling rapid melting and freezing. The team is now scaling up the prototype size by 50 times.

• In a new report from the Biotechnology Innovation Organization, “Advancing the Biobased Economy,” McKinsey & Co. estimates that biobased products will make up 11 percent of the $3.4 trillion global chemical market by 2020. [pdf]

• “Designing superior phase change materials from lipids,” by Dr. Michael Floros, appears in this month’s issue of INFORM magazine, published by the American Oil Chemists’ Society. In recent studies, he writes, PCMs made from saturated lipids outperformed their paraffin counterparts. Floros is a postdoctoral researcher in the Trent Centre for Biomaterials Research at Trent University in Canada.

• Registration for the 2017 ARPA-E Energy Innovation Summit is now open. The summit will be held Feb. 27 to March 1, 2017, at the Gaylord Convention Center outside Washington, D.C. The summit is aimed at industry experts, thought leaders and decisionmakers focused on moving transformational energy technologies out of the lab and into the market. An agenda will be posted later this fall.

• David Bergeron, founder and CEO of SunDanzer, is featured in a Houston Chronicle piece on NASA spinoff technologies. SunDanzer makes solar-powered refrigerators that use phase change material to keep vaccines and other temperature-sensitive payloads at the right temperature. Who knew that Bergeron, who was once an engineer at NASA, spent 18 years designing satellites?

• Pelican BioThermal is expanding manufacturing capabilities at its Minnesota facility. The goal is to better serve customers of its single-use temperature-controlled shippers in North and South America. The shippers have been manufactured exclusively in the United Kingdom. 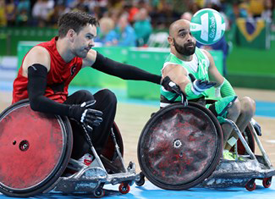 • Canada‘s wheelchair rugby team won its opening match in the 2016 Paralympic Games in Rio, defeating host Brazil 62-48 on Wednesday. The Canadians are using PCM-equipped cooling vests developed by two recent graduates of Kwantlen Polytechnic University in British Columbia. The vests were reportedly referred to, incorrectly, as “Kevlar” in TV coverage of the match.

• A food distributor in Puerto Rico has installed its fourth thermal energy storage system from Houston-based Viking Cold Solutions. Plaza Provision Co. says the previous three systems, installed in 2010, 2013 and 2014, have saved the company more than $650,000 and reduced energy consumption by over 3,200 MWh. The PCM-based system stores energy at night for subsequent day use, allowing refrigeration to run less frequently.

From Journal of the Korea Institute for Structural Maintenance and Inspection:

From Journal of the Korean Society for Aeronautical & Space Sciences:

From Journal of Solar Energy Engineering:

From Fire Science and Engineering:

Nearly 900 of your peers have joined a LinkedIn group devoted to the discussion of phase change material and thermal energy storage. The Phase Change Matters group is an interactive complement to the award-winning blog and newsletter of the same name.

You are invited to join the group and connect with PCM and TES experts from around the world. New members this week include Karthik Remella, a Ph.D. candidate in mechanical engineering at the University of Cincinnati, Ohio; Patrick Garrity, mechanical engineer at MITRE Corp., Bedford, Mass.; Brooke Naples, product management associate at Sonoco ThermoSafe, Arlington Heights, Ill.; and Kaviresh Bhandari, lead mechanical design engineer at Inresol AB, Gävle, Sweden.

Tanya Agarwal, a researcher at the Center for Energy and Environment, National Institute of Technology, Hamirpur, India, is looking for help with PCM building simulations. She writes:

“I want to learn the modeling and simulation tools for buildings when integrated with phase change materials. I however cannot find a place where I can get detailed literature to help me develop the basic understanding about it. If you know any sources of learning which could be a help, I would be really grateful!”