A recent post on MAHLE‘s development of a heat exchanger designed to increase the driving range of electric vehicles in cold weather drew the attention of Luc Traonvouez, a French design engineer and owner of Insula France. In 2013, he worked with RBL Plastiques on a similar project. He contacted me via LinkedIn and offered to share the unpublished details of his work. 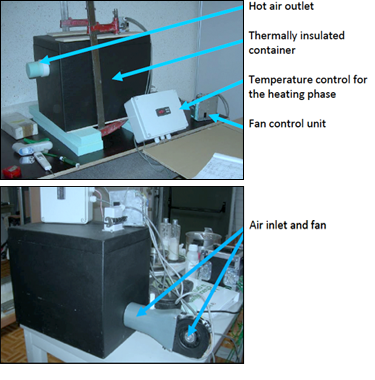 Traonvouez’s demonstration unit uses erythritol, a phase change material with a melting point of 118° Celsius and a latent heat value of 340 joules per gram. As with the MAHLE system, the PCM is melted while the vehicle battery is charged, using electricity from the grid. The stored heat is released as the PCM solidifies during driving.

The prototype weighs 15.7 kilograms, of which 22 percent is erythritol. The PCM is stored in a rectangular aluminum container with large fins inside and out. The internal fins drive the heat out of the PCM to the aluminum container; the external fins transfer the heat to air. The finned assembly is placed inside a thermally insulated envelope that can maintain the heat for several hours. An electric fan moves air over the fins and pushes it into the vehicle’s cabin on demand.

Erythritol is relatively cheap and shows little supercooling, according to Traonvouez. But he notes two major problems with the material:

“1. The volume change between solid and liquid states is roughly 10%, and when cooling happens the PCM crystalizes around the fins, with a void between the fins and in some areas a void between the PCM and the fins; this means that after a peak of power when releasing heat from the storage, there is a fast drop. As the need for heating is much higher when starting the cold car than in stabilized mode, this drop is less a problem as it would be if we had needed a constant output.

“2. This PCM is subject to fast degradation when over heated in air; so the best is to cap heating at 140°C and confine the PCM in an airproof volume from which oxygen has been removed. When using a PCM with 10% volume size, we cannot fill the macroencapsulation completely with liquid PCM, but rather leave a significant empty volume and put it under some vacuum before sealing.”

This chart shows the heat output of the demonstration unit over a 54-minute period:

Traonvouez concludes: “The demonstration unit must be improved, one way being for example to use another way than fins in the PCM to improve its global thermal conductivity. However, the result is interesting and can be industrialized once tested extensively and over a high number of extreme cycles.” 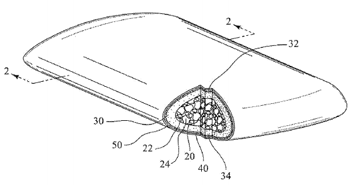 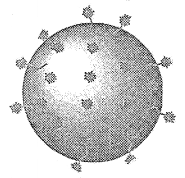 • Cooling jackets made by a “private company in Gurgaon” – Pluss Advanced Technologies, perhaps? – are being tested by India’s Border Security Force. The jackets, fitted with phase change material, face extreme conditions: Temperatures in the Thar Desert on the Pakistan border can exceed 50º C (122º F).

• About $7.8 trillion will be invested in renewable power worldwide over the next 25 years, according to Bloomberg New Energy Finance. The report, New Energy Outlook 2016, projects that wind, solar, hydro and other renewable energy sources will generate 70 percent of Europe’s power in 2040, up from 32 percent in 2015. In the United States, 44 percent of power will come from renewables in 2040, up from 14 percent in 2015. 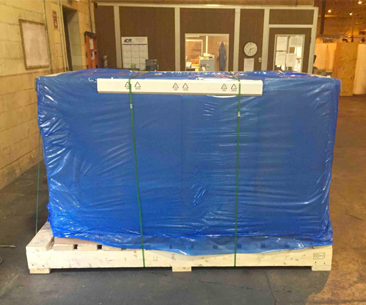 • Ice Energy CEO Mike Hopkins reports on LinkedIn: “I’m excited to be getting an Ice Bear 20 for my ranch in Santa Barbara. It will be our first installation in California. Here’s a picture of it all wrapped up and ready for shipping from our factory in Hammondsport, New York. It will have a stopover at our facility in Riverside and then up to my place.” The Ice Bear 20, a smaller version of the company’s commercial thermal energy storage system, is designed for the residential market. The ice-based system has a 265-gallon tank and a thermal storage capacity of 240,000 BTUs. It is 44 inches wide, 40 inches high and 75 inches deep.

• Ember Technologies, maker of the Ember temperature-controlled coffee mug, reports that it has been working “around the clock” to improve the mug’s firmware, mobile app and a few key hardware components. In an e-mail to backers, the Westlake Village, Calif., company says the next production run is scheduled for July. No word on when initial orders will be shipped. Deliveries were originally promised to IndieGoGo backers by April 2016.

• Encapsys LLC of Appleton, Wis., has launched a redesign of its website, www.encapsys.com. The new design features fresh photography, a video gallery, improved navigation and responsive design to ensure optimal display on desktops and mobile devices.

• Chemical companies can save 6 percent to 10 percent annually on raw materials with improved purchasing processes, according a McKinsey & Co. analysis.

• A petition filed with the U.S. Supreme Court in connection with diagnostics research has a prompted fresh discussion of a familiar question: Do patents promote or hinder innovation?

• Whatever the outcome of free trade negotiations between the European Union and the United States, the European Commission has promised that REACH, the EU’s chemicals regulatory framework, will remain unchanged.

• An update on appliance maker Glen Dimplex’s Quantum electric thermal storage system: In a trial program funded in part by EU‘s Horizon 2020 program, the technology has been installed in 200 of a planned 800 homes in Ireland. Installation is about to begin on the first 100 of 400 homes in Germany. The remaining 50, in Latvia, will be complete by the end of the summer.

• The average cost of electricity generated by solar and wind energy could drop by up to 59 percent by 2025 if the right policies are in place, the International Renewable Energy Agency reported this week.

From Journal of Applied Polymer Science:

More than 750 of your peers have joined a LinkedIn group devoted to the discussion of phase change material and thermal energy storage. The Phase Change Matters group is an interactive complement to the award-winning blog and newsletter of the same name.