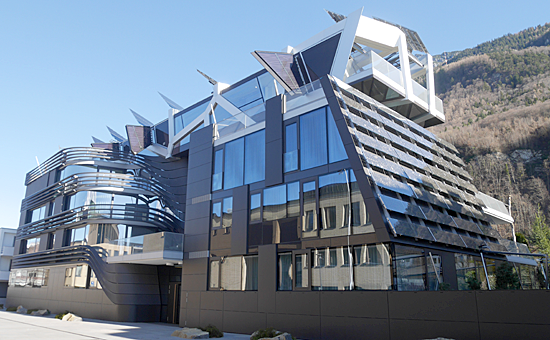 The six-year project was directed by Anton Falkeis and his wife, Cornelia Falkeis-Senn, world-renowned architects based in Vienna. Their client, Liechtenstein attorney and banker Peter Marxer, challenged them to design a sustainable apartment building that relies as much as possible on renewable energy.

A team that included energy experts from the Lucerne University of Applied Sciences and Arts was assembled for the complex task. Countless hours of planning, research, design work, computer modeling and prototyping produced a number of innovations used in the 12-unit Marxer building, including:

• An array of 13 photovoltaic panels that rise from the roof and track the sun’s path across the sky, optimizing the collection of solar energy.

• Load-bearing structures that mimic nature in appearance and function.

• Seven “climate wings” that fold out of the building facade and absorb, store and release thermal energy as needed to keep the interior comfortable.

The computer-controlled solar panels, which measure up to 14 square meters, rise from the roof at sunrise and turn with the sun during the day. When night falls or inclement weather approaches, the panels automatically fold back into the roof. The system is said to collect nearly three times the solar energy of stationary panels.

Anton Falkeis described the project as a “prototype for a decentralized urban energy production system that’s part of a bigger network.”

“We created an energy cluster with the surrounding buildings, some of which are owned by the same client,” he said. “We share the energy generated by our PV trackers embedded in the roof structure first with the cluster. We sell any surplus to the grid. The utility can use the surplus to refill the hydro power plant storage.”

Four wings on the building’s western side are dedicated to heating. They are filled with PCM that has a melting point of 31 degrees Celsius. In cold months, these wings open during the day, exposing the PCM to solar radiation that melts the material. Each wing folds back at night and connects to ventilation systems in the adjoining apartments. The tubes release heat as the PCM solidifies, and low-power fans move the warm air throughout the apartments.

Three wings on the eastern side are dedicated to cooling. The PCM in these has a melting point of 21 degrees C. In summer, the wings open at night, allowing cool air to solidify the PCM. Each wing folds back against the building during the day and connects to the adjoining ventilation systems. Indoor air is cooled as it flows past the frozen PCM in the wing.

How did the team address flammability issues associated with biobased PCM?

“We developed the encapsulation so that no oxygen can come in contact with the PCM,” Falkeis said. “The whole thing was tested to 300 degrees Celsius, heating up, cooling down, heating up. And finally we got permission by the building commission, a Swiss testing certificate, to use it in the building envelope. Swiss testing accreditation is valid all over Europe.”

Aside from patent applications, what’s next for all this ground-breaking technology?

“We need to reduce complexity and try to produce more standardized building envelope panels or systems that could be part of a regular building system,” Falkeis said. “This is our next step: Reducing the complexity in terms of form.”

He also hopes to spread awareness. “Active energy building” technology was on display at a New York City exhibition that ended in January. The exhibit opens in Los Angeles on March 1; after that, it will be on display in Vienna and Berlin.

Now that the complex project is complete and the first tenants have moved in, the architect says he is “very happy” with the results.

“There’s a lot of architectural and technological detailing,” he said. “There are more than 800 drawings just on detail. It’s very precise. It’s very well done. Very high standards. It’s really crazy how finally everything came out like we planned it.  It was six years of hard work, being on site, checking everything. …  It was a sort of never-ending ongoing research project. It was really exciting to be part of this.” 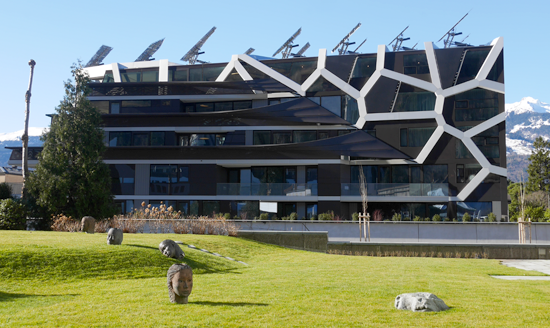 The east side of Marxer building faces a small park, a biking trail and a creek.

PCM compositions and methods of making the same 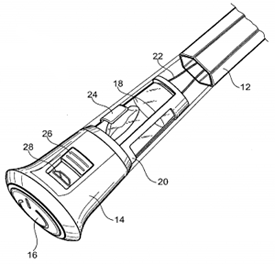 “A heating apparatus for use with an athletic device having a shaft and a plurality of hand holding locations associated with portions of the shaft. The heating apparatus comprises a removable self-contained module configured to be received within an athletic device shaft and to emit heat to at least two hand-holding locations of the athletic device shaft. The self-contained module comprises a plurality of heating elements configured to emit heat to the at least two hand-holding locations. The self-contained module further comprises a power source connected to supply electrical power to the plurality of heating elements. A user-operable control is coupled to the power source and configured to selectively power on and regulate the heat released from the heating elements.”

“A prosthesis cooling system may comprise one or more thermoelectric cooling devices embedded in a prosthesis socket, a power source, and a power control circuit. The cooling system may use active or passive cooling, and may use a closed-loop temperature control system. … In some embodiments, a phase-change material (PCM) may be used to assist in removing waste heat from the prosthesis”

Storage systems and methods for medicines 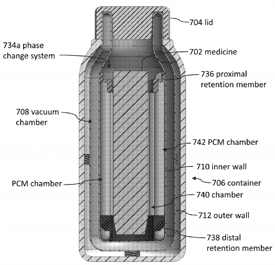 • Croda recently redesigned the CrodaTherm website, www.crodatherm.com. The new site offers improved navigation and searchability, a wider range of potential PCM applications and profiles of the CrodaTherm technical team. Visitors can register to log in and download datasheets and order samples.

• Members of the RAL Quality Association PCM, a European-based organization established in 2004 to develop standards for the phase change material industry, will meet in Düsseldorf, Germany, on March 1. On the agenda: Quality and testing specifications; improvements to the association’s website; member content on the BUILD UP Web portal; promotion of PCMs in the European Union, Germany, Netherlands and the United States; and registration of RAL quality marks.

• Sonoco ThermoSafe is accepting registrations for the company’s first Leading Minds Seminar, to be held June 6-7 in Philadelphia. Co-hosted by ELPRO, the seminar is a chance for pharmaceutical manufacturers, supply chain partners and government representatives to discuss temperature-assurance packaging and data monitoring in a collaborative environment. Day two includes a visit to ThermoSafe’s design and testing lab in Montgomeryville, Penn.

• Sonoco is No. 90 on Barron’s inaugural list of “The 100 Most Sustainable Companies.”

• A “measurement and verification study” of a Viking Cold Solutions TES system installed in a 320-square-foot walk-in freezer at a supermarket in Fremont, Calif., showed an 18 percent net reduction in energy consumption.

• The deadline is Monday, Feb. 12, to submit a concept paper for ARPA-E‘s OPEN 2018 competition. Up to $100 million is available for new projects that “transform the way we generate, store and use energy.”

• DLR Group, which part of a public-private collaboration working to develop PCM-based cooling and heating methods for Agua Fria Canyon View High School, has been named one of Arizona’s “40 Companies to Watch” in 2018 by AZRE magazine.

• Entries are being accepted for Bio-Based World News‘ 2018 Innovation Awards. The four categories are product of the year, chemical innovation of the year, best use of alternative feedstocks and industry story of the year. The entry deadline is Feb. 23. Winners will be honored March 20 at the World Bio Markets conference in Amsterdam.

• Nantucket, Mass., has approved the installation of an Ice Bear thermal storage and air-conditioning unit in a building owned by the town. Last summer, Genbright won a $1.5 million grant from the state to install the units in more than 200 Nantucket homes, with the goal of reducing peak energy demand and staving off the need for a third undersea power cable for the island. But some residents voiced skepticism about the technology, prompting the town board to approve the test installation.

• Shippers have found that cocoa butter can be hard to contain on long ocean voyages. There have been reports of the material leaking out of containers as it changes phase, clogging bilges and generally making a mess. The Cargo Incident Notification System, established in 2011 to share information on all cargo-related incidents, has issued guidelines that recommend the material be shipped in refrigerated containers, particularly when passing through hot climate zones.

From Thermal Science and Engineering Progress:

More than 1,100 people have joined a LinkedIn group devoted to the discussion of phase change material and thermal energy storage. The Phase Change Matters group is an interactive complement to the award-winning blog and newsletter of the same name.