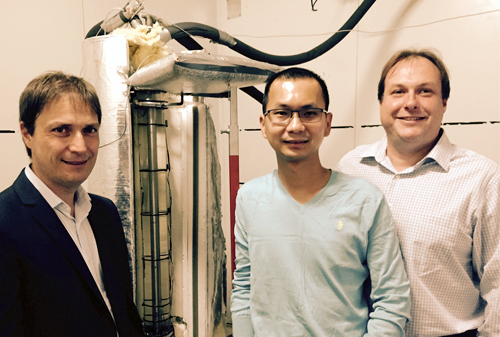 A team of Australian researchers has won a Eureka Prize for developing a low-cost, salt-based energy storage system.

The University of South Australia team – Associate Professor Frank Bruno, Dr. Steven Tay and Dr. Martin Belusko (above, left to right) – will share the $10,000 prize for Innovative Use of Technology.

The system uses surplus solar power or off-peak electricity to solidify phase change material contained in compact coils inside storage tanks. Melting releases energy when it is needed. The system is said to store energy at one-tenth the cost of batteries.

A commercial-scale version of the system has been installed at a large farm in south Australia. That system stores off-peak electricity from the grid to cool produce storage rooms more cheaply during the day.

In an interview with Real Estate Weekly, Goldman Copeland CEO Charlie Copeland talks about the simple idea behind U.S. Patent 8955763, “Building heating system and method of operation,” first filed on Oct. 4, 2007, and granted on Feb. 17, 2015: 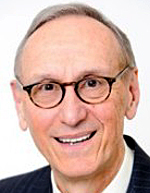 “To limit steam demand, Con Edison implemented a peak winter steam demand charge, much as it does for electricity. However, the utility was required to offer customers strategies to mitigate these high demand charges.

“Con Edison approached [Goldman Copeland], which had years of experience pioneering energy solutions and was known for its innovative thinking, to devise a way to reduce peak steam demand.

“Copeland recalled that the “aha! momentˮ came after several different approaches had been considered.

“One day, while he was reviewing options and drawing on his experience with older buildings, he said, ‘The idea came to me. There is a reservoir of water already in the perimeter systems (induction and fan coil unit) that could be used to store thermal energy in advance of the 8 to 11 am peak usage time, thereby requiring less steam during those peak hours.’ ”

The PCM was installed in one of two identical warehouses. The Redstone Rocket, a publication of the Army’s Redstone Arsenal in Decatur, Ala., reported on the pilot project this week:

“For four months, exterior and interior temperatures in the two buildings were recorded every 15 minutes at multiple locations. The monitoring showed how temperatures fluctuated much less within the building where the PCM was installed, especially during winter months. Natural gas consumption data showed a 50 percent energy savings, proving that the heat turned on less in the building with the PCM.

” ‘We have statistically significant data showing the impacts of the material on the warehouse temperatures,’ said Charles King of TriVector Services. ‘What’s most important though is the relationships we’ve built with Sierra, and we look forward to furthering that in the future.’

“Sierra would like to expand the current effort across multiple facilities in the future, pending the availability of funds.”

MIT Technology Review has named Rahul Panicker one of 2015’s “35 Innovators under 35.” Panicker and three Stanford University classmates created the low-cost Embrace infant warmer and brought it to market. Panicker, co-founder and president of products at Embrace Innovations in Bangalore, India, explains how in an interview with the magazine: 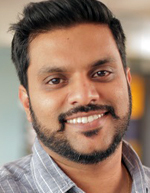 “[W]e came up with a prototype incubator that costs 1 percent as much as traditional solutions and can be operated by a non-expert. It uses phase change materials to keep babies at the ideal temperature of 37° C for up to six hours without electricity. When heated with hot water or another source, a phase change material melts, and it can release heat the baby needs at a constant temperature.

“NGOs we’d partnered with passed on the design. We realized if we didn’t take this forward, no one else would. After a year of working on the project in my free time, we finally had our seed capital, and in 2009 I quit my job, moved to Bangalore with my three cofounders, and started Embrace. Since then our warmers have been used in 15 countries to help nearly 200,000 babies. We’ve implemented a hybrid for-profit/not-for-profit business model that lets us scale much faster than a charity.”

In an interview this month with the Economic Times, Panicker described startup companies in his native India as lacking “big visionary thinking”:

PV, CSP and TES: Why a hybrid approach makes sense

Which solar energy technology will prevail, photovoltaic or concentrating solar power? Matt Orosz, cofounder of STG International and co-principal investigator at Cogenra Solar, says combining the two might enable integration of low-cost thermal energy storage and carve out a place in the energy grid’s renewables-driven future.

“To reduce the need for electrical storage and take advantage of the increasing efficiency and diminishing costs of PV,” Orosz writes on SPIE.org, “the US Department of Energy’s Advanced Research Projects Agency–Energy (ARPA-E) has created the Full-Spectrum Optimized Conversion and Utilization of Sunlight (FOCUS) program to link PV and CSP.

“Several groups have responded to this challenge with innovative ideas: a team from Arizona State University is replacing traditional PTC mirrors with PV cells layered under an IR-reflective film that sends light to a traditional CSP absorber tube. At Cogenra Solar, we are keeping traditional PTC mirrors but interposing a secondary dichroic mirror in front of the CSP tube to reflect the visible part of the spectrum onto an additional receiver based on concentrated PV. Both these efforts attempt to split the solar spectrum to maximize the energy flux that corresponds to the PV band gap and avoid the temperature incompatibility between PV and CSP.” 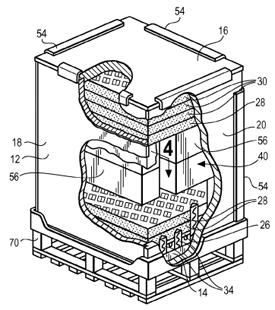 “A packaging system for a temperature sensitive payload is provided. The system comprises insulative panels, including side panels and end panels, forming a product compartment. Cooling layers within the product compartment are located below and above the products. Channel members affixed to the side panels and/or the end panels create spaces and channels for convective air movement. … Each frozen component may comprise a phase change material and a protective outer container.”

From Industrial & Engineering Chemistry and Research:

From Symposium on Advanced Control of Chemical Processes:

From Journal of Microencapsulation:

More than 290 of your peers have joined a new LinkedIn group devoted to the discussion of phase change material and thermal energy storage. The Phase Change Matters group is an interactive complement to the blog and newsletter of the same name.

You are invited to join the group and connect with PCM and TES experts from around the world. New members this week include Kenton Phillips, a research specialist at the Center for Architecture Science and Ecology, Rensselaer Polytechnic Institute; Theodora Vagiou, thermal modeler at Arup, Birmingham, U.K.; Colin Haworth, sales and marketing director at Monodraught Ltd., U.K.; and Navin Kumar, who is pursuing a master’s degree in fluid dynamics and turbomachinery at Texas A&M University.

Got a question about PCMs or TES? Ask our experts

Two Entropy Solutions advisors, Dr. Mohammed Farid of the University of Auckland and Lucas B. Hyman of Goss Engineering, are ready to answer your questions about phase change material and thermal energy storage. We’ll select the best questions sent to inquiries@puretemp.com and post the answers here each Friday.