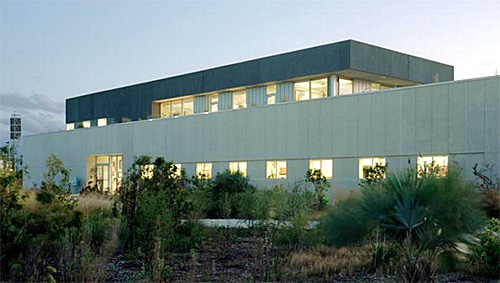 “Post-occupancy evaluation,” the process of measuring a new building’s actual performance, is an essential part of the design feedback loop. Is that impressive-looking thermal energy storage system delivering the projected energy savings? POE is gaining momentum among sustainability architects to address the frequent gap between promises and reality, Peter Fairley writes in this month’s issue of Architectural Record.

“The value of getting feedback on projects hit home for [New Orleans–based Eskew+Dumez+Ripple] after the opening of its first LEED-certified building: the Dr. Nancy Foster Florida Keys Environmental Center [show above] in Key West. The 30,000-square-foot multipurpose facility, occupied by the U.S. National Oceanic and Atmospheric Administration in 2006, was predicted to consume 735,000 kilowatt-hours per year — 28 percent fewer than the ASHRAE baseline. In its first two years of operation, however, the LEED Silver building was consuming almost twice that amount.

“Faulty settings in the building-management system were the culprit: two months after commissioning, a software upgrade wiped out the settings tuned by the commissioning agent. A local consultant’s efforts to fix the problem fell short. Ultimately, humidity and mold issues convinced the owner to bring Eskew+Dumez+Ripple and the commissioning agent back into the picture nearly two years later. The problems were then quickly resolved. Energy consumption immediately fell below what designers had originally predicted.

“Eskew+Dumez+Ripple determined that from that point forward they would attempt to track energy consumption of all their LEED projects. They wanted to understand the variables affecting performance and get a jump on any issues that arose.”

Appvion Inc. has sold its Encapsys microencapsulation division to an affiliate of Sherman Capital Holdings LLC, a private investment firm based in Baltimore. The purchase price was $208 million.

Mary Goggans, vice president and general manager of the Encapsys division under Appvion ownership, has been named president of the now independent Encapsys LLC.

The company employs about 90 people at offices and research labs in Appleton, Wis., and at a manufacturing plant in Portage, Wis. The company encapsulates a wide range of material, including perfumes, pharmaceuticals, solvents and phase change material.

In an interview with socalTECH.com, Ice Energy CEO Mike Hopkins explains why his company focuses on selling ice-based energy storage to utilities, not building owners or tenants:

“If a home or building has energy storage, it is actually providing benefit to the entire grid. When you reduce peak demand with any form of energy storage, you’re doing something good not just for the building, but also reducing the grid’s peak demand. So if you are a building owner, if you have to pay for that storage, you’re only getting part of the value. Until rates reflect the real cost of energy, or until rebates are large enough to compensate building owners for their benefit to the grid, we will focus on the utility market.”

The Glendale, Calif., company says it will develop a line of smaller residential systems and extend the range of applications supported by its flagship Ice Bear system. Ice Energy expects to hire a team of 12 to run the 22,000-square-foot center, which will also serve as a staging area for the Riverside Public Utilities Ice Bear program and support Ice Energy’s 25.6-megawatt Southern California Edison project.

Chilly office? Blame it on a 1960s formula devised for ‘average’ man

A study published this week in Nature Climate Change says most office buildings set thermostats based on a 1960s formula that uses the metabolic rates of men. The formula:

“Standard values for one of its primary variables — metabolic rate — are based on an average male, and may overestimate female metabolic rate by up to 35% (ref. 3),” the researchers wrote. “This may cause buildings to be intrinsically non-energy-efficient in providing comfort to females. Therefore, we make a case to use actual metabolic rates.”

President Obama called it “the single most important step America has ever taken in the fight against global climate change.” Critics such as Wisconsin Gov. Scott Walker accused the president of “overstepping the limits of his authority” and took action to block Obama’s plan to drastically reduce carbon pollution from U.S. power plants. In a detailed look at the Clean Power Plan, Vox.com‘s Brad Plumer notes that the final version is “slightly stronger” than the draft released last summer:

“For instance, the EPA has tweaked the formula it uses to set individual state goals. States will now have until 2022 rather than 2020 before they have to start cutting. These tweaks will get lots of press attention, and they’re of keen interest to policymakers and utilities. The EPA also hopes they’ll solidify the rule against legal challenges. But they don’t significantly alter the big picture.”

“The present invention relates to a heating and/or cooling assembly such as a heat pad. The assembly includes a plurality of modules articulated together by connection means so that the assembly can be manipulated by a user to adopt a desired profile. At least one of the modules contains a thermal store in the form of a solid, liquid or gel responsive to heating or cooling externally applied to the assembly so that the solid, liquid or gel is heated or cooled, respectively, and remains in a heated or cooled state for a prolonged period of time after the externally applied heating or cooling is removed.”

Want to pitch your thermal energy storage system to a customer? Dan Mizesko, managing partner at U.S. Chiller Services International in Dubai, says the project’s success is unlikely unless three or more of these conditions are true:

• Electricity energy charges vary significantly during the course of a day.
• Electricity demand charges are high or ratcheted.
• The average cooling load is significantly less than the peak cooling load.
• The electric utility offers other incentives (besides the rate structure) for installing TES.
• An existing cooling system is expanded.
• There is new construction.
• Older cooling equipment needs replacing.

“Historically, the driving force for developing TES has been reduction of on-peak electric demand and the corresponding reduction of electricity costs,” Mizesko writes in Climate Control Middle East magazine. “While this is still important, and may be the most significant factor affecting application, cost-effectiveness and energy savings are possible, and can be a significant benefit when the entire cooling system, and not just the storage media and vessel are considered.”

Europe’s joint Ph.D. program on thermal energy storage, announced earlier this year, now has a name (InPath-TES), a coordinator (Dr. Luisa Cabeza of the University of Lleida), a Twitter account (@InPath123) and a website (www.inpathtes.eu).

The website, unfortunately, is not yet fully functional. The footers display placeholder type (“Some link text to link”), as does the events page (six duplicate listings for the 2015 Solar Heating and Cooling conference in Turkey). But you can sign up for the program’s biannual newsletter [pdf].

The program’s goal is to create a network of universities and research institutes to implement a joint Ph.D. program on TES technologies. Partners include Trinity College Dublin, Technical University of Eindhoven, University of Ghent, Warsaw University of Technology, Abengoa Research and KIC InnoEnergy. Core objectives include annual workshops, common training modules and academic/industry student exchanges. Within six years, the group hopes to graduate at least 28 Ph.D. students a year.

From Journal of Chemical and Engineering Data:

From Ceramics for Energy:

More than 260 of your peers have joined a new LinkedIn group devoted to the discussion of phase change material and thermal energy storage. The Phase Change Matters group is an interactive complement to the blog and newsletter of the same name.

You are invited to join the group and connect with PCM and TES experts from around the world. This week’s topic: PCM as backup refrigeration for high-value cheeses, meats. Among the comments:

“Since this is only an emergency system, only a few cycles are expected over lifetime,” writes Yvan Dutil, an instructor at TÉLUQ, a Quebec-based online university. “Hence, a cheap solution like hydrated salt might be better. However, I don’t know what is the shelves lifetime of hydrated salt.”

“I agree with Yvan that hydrated salts maybe better because of the cost, however, most of them are corrosive and you need to use plastic container,” writes Dr. Mohammed Farid of Auckland University, an Entropy Solutions advisor. “My understanding is that the stored temperature should be above zero so there are some commercial PCM such as PT4 [and] PT8.”

Marco Schmidt, head of business management at Micronal, adds: “This application has exactly the same task like telecom shelters in India, where a PCM bridges the time gap of daily electric blackouts in order to keep the electronics cool enough for proper function. The application can be seen here for example: http://www.teappcm.com/products.htm. It seems they also offer the respective products for this application.”

Got a question about PCMs or TES? Ask our experts

Two Entropy Solutions advisors, Dr. Mohammed Farid of the University of Auckland and Lucas B. Hyman of Goss Engineering, are ready to answer your questions about phase change material and thermal energy storage. We’ll select the best questions sent to inquiries@puretemp.com and post the answers here each Friday.