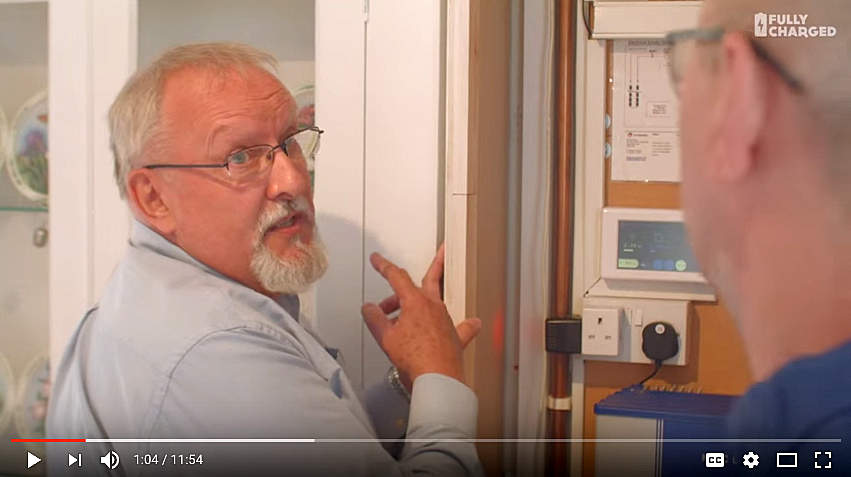 The lively YouTube series highlights the latest developments in renewable energy. In the new episode, Sunamp employee Andy Trewin, above, explains how the system installed at his home in Bristol, England, works.

The 5-kilowatt SunampPV battery stores excess energy collected by rooftop solar panels and releases heat on demand for hot water and central heating. Trewin says the system has reduced his gas bill by 75 percent since it was installed last year.

“I started off with one SunampPV battery, and I’m now experimenting with two to make more use of the excess energy produced,” Trewin says in the clip. “The battery links through to the back of the boiler and when I switch on the tap cold mains water flows through the battery and instantly heats up to 58 degrees. A blending valve cools it to a comfort level, giving us hot water on demand using solar energy.”

The U.S. Environmental Protection Agency is accepting nominations for the 2017 Presidential Green Chemistry Challenge Awards. Companies or institutions that have developed a process or product that better protects public health and the environment are eligible.

Nominations will be accepted through Dec. 31, 2016. There is no entry fee. There are six award categories this year:


Since the program began 21 years ago, the EPA has received more than 1700 nominations and presented awards to developers of 109 technologies. Dr. William R. Sutterlin, chief science officer at Entropy Solutions, was a member of a University of Missouri team that won the academic award in 2006 for developing an inexpensive method to convert waste glycerin, a byproduct of biodiesel fuel production, into propylene glycol.

“Thermostatic materials and methods for making and using the materials are disclosed. The thermostatic materials have phase change materials (PCMs) incorporated into a composite with thermoreversible gels (TRGs) that undergo gelation prior to the melt temperature of the PCMs so that at temperatures at which the PCMs become liquid, the liquid PCM is retained by the gel, and at temperatures at which the gel becomes liquid, the liquid form of the gel is retained by a solid form of the PCM.”

Aliphatic materials and uses thereof in heating and cooling applications

• Siemens says its packed-bed thermal storage concept for wind power could deliver energy at well below 0.10 euros per kilowatt-hour. The system uses surplus electricity to blow air at 600 degrees Celsius across a packed bed of basalt rocks in an insulated container.

• The National Law Review takes a detailed look at the impact of the newly revised Toxic Substances Control Act on chemical importers, noting that “companies planning to ship chemical-based products to the United States should have a basic understanding of the TSCA.”

• Researchers from the Universidad Politécnica de Madrid have invented a new thermal energy storage system that uses molten silicon to store up to 10 times more energy than existing storage devices. “The proposed new thermal energy storage system,” according to a report in New Atlas, “involves heating the silicon in a container using either concentrated sunlight on surplus electricity generated by renewable power. The molten silicon – which can reach temperatures of around 1,400° C (2,552° F) – can be isolated from its environment until energy is needed, at which point the heat is converted to electricity.”

• SolarReserve has proposed building the world’s largest solar power plant in Nevada. The 2-gigawatt Sandstone project would include up to 10 concentrated solar arrays, each equipped with a molten salt thermal storage system.

• SUNCNIM has raised 60 million euros to help finance construction of the world’s first commercial Fresnel concentrated solar power plant with energy storage. The plant in the French Pyrenees will have four hours of thermal storage capacity. The thermal energy will be converted into electricity by a steam generation process.

• Ember Technologies, which raised more than $350,000 on IndieGoGo last year to develop a temperature-adjustable mug, sent backers another update this week: “We are happy to announce that shipping will begin the first week of November for our pre-order customers.” The $150 mug uses bio-based phase change material and a microprocessor-controlled heating system to maintain hot beverages at temperatures set by the user.

• Alexium International has announced sales agreements to supply its phase change cooling technology (Alexicool) to two unidentified mattress fabric producers based in the United States. The company says the three-year deals will generate $3 million in revenue per year.

More than 900 of your peers have joined a LinkedIn group devoted to the discussion of phase change material and thermal energy storage. The Phase Change Matters group is an interactive complement to the award-winning blog and newsletter of the same name.

You are invited to join the group and connect with PCM and TES experts from around the world. New members this week include Matan Feldman, aerospace engineer, Israel; Gerard Ferrer Muñoz, Ph.D. candidate at GREA, University of Lleida, Spain; Christina Konstantinidou, Ph.D. candidate at Aristotle University of Thessaloniki, Greece; and Shin Kishioka, president, ITA Inc., Chicago.